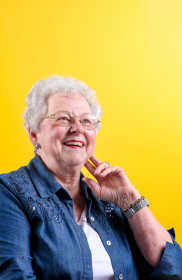 It was on the stairs in a hallway at Cape Catholic High that Carolyn Bohnert, senior vice president of Drury Southwest, saw Bill Bohnert and told her friend, “That’s the man I’m going to marry one of these days.” And she was right: the two met when Carolyn was a junior, and four years later, they were married.

Fifty-seven years of marriage later, the school — now known as Notre Dame Regional High School — still matters deeply to Carolyn. Bill and Carolyn sent their three children to the school, and Carolyn’s nieces and nephews attended, as did her grandchildren.

“So I just feel a commitment to the school,” Carolyn says. “I love the school.”

Carolyn’s commitment is not only talk: for the past 16 years, she has served on the Notre Dame Regional High School Foundation Board and was a recipient of the Foundation’s Annunciation Award and the Bob Miller Award. For the past 26 years, even after her children have long graduated, she has spent countless hours volunteering with Notre Dame’s bingo fundraising, playing a large part in the project. It’s a twice-a-week project that a 2018 Southeast Missourian story reported raises more than $100,000 for the school each year, with profits helping to keep down the cost of tuition.

In addition to helping run Notre Dame’s bingo, Carolyn was a founding member and a significant part of Drury Southwest’s Relay for Life team with the American Cancer Society, which raised $42,000 last year for the cause through holding a dinner auction as well as smaller fundraisers throughout the year. It’s a cause important to her because her sister passed away from cancer, and Carolyn herself is a cancer survivor.

Beyond these organizations, Carolyn is a member of St. Vincent de Paul Parish in Cape Girardeau, where she served as president of the Women’s Council for three years. She is also a member of the Friends of Saint Francis, a support organization of Saint Francis Healthcare System. And through her role as senior vice president at Drury Southwest, she has gotten the company involved in countless charitable organizations throughout Southeast Missouri.

It’s a role that was meant for her. After high school, she worked at First National Bank in Cape Girardeau for five years. When her children were small, she was a stay-at-home mom and babysat and sewed for people. One day, Carolyn’s brother-in-law, the late Bob Drury, asked if Carolyn would like to work for him part-time; the company had three hotels at the time. Carolyn said yes and went to work the following day, on a Thursday. That Saturday, they flew to Nashville to see two properties that were under construction.

“That next Monday morning, I was full-time,” Carolyn recalls. “It has been full-time and overtime ever since. With all the Drury projects that the company has been doing, we do a lot for Cape and helping it grow. So that’s basically what I love to do.”

Carolyn’s daughter, Lindsay Bingaman, began working with her mother at Drury Southwest throughout her childhood and teenage years, shredding paper to raise funds for the Show Me Blades Figure Skating Club, of which Carolyn and her husband were founding members. Bingaman eventually began working at Drury Southwest part-time, helping her mother with charitable giving projects, which led to her being hired full-time in 2016, as the charitable giving coordinator. It was then, she says, she realized all her mom does for the company.

“There are many things I admire,” Bingaman says of her mother. “Dedication, number one. When she puts her mind to something, it’s going to get done. And it doesn’t matter who says something different; it’s going to happen.”

With 47 years at Drury Southwest, Carolyn has been a foundational part of building the company that has won the J.D. Power Award for 14 consecutive years; “Bob and I made a very good team,” she recalls. She says her pride in working for Drury Southwest is what keeps her going.

“People ask me when am I going to retire? I say well, I don’t know how to spell it. Once I learn how to spell the word ‘retirement,’ then I might think about it,” Carolyn jokes. “Staying here keeps me focused and keeps my mind sharp. You constantly meet new people, new challenges. And I love taking on jobs and seeing them finished. … We’ve developed an extremely good team here. And it’s so good to be a part of it. ”

Article is courtesy of the Southeast Missourian:  https://www.semissourian.com/story/2628310.html