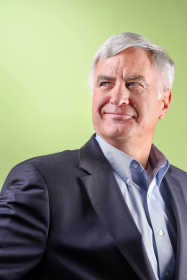 While serving in the U.S. Air Force 37 years ago, Dennis Vollink received a call that would map the course of his personal and professional life for the next four decades.

Bob Drury of Drury Southwest in Cape Girardeau was looking for a pilot. After contacting Randolph Air Force Base in Universal City, Texas, and speaking with a couple of pilots who weren’t a fit, the pilots said Drury should meet with Vollink, who, they believed, would be the perfect candidate: not only was he a pilot and engineer, but the career path was something his peers believed would suit him.

“Bob [Drury] wanted their pilots to do something when they traveled,” Vollink says. “And he knew that most of the pilots either had math or engineering degrees.”

It set the stage for Vollink’s career, flying for Drury Southwest and using his engineering background to design Drury properties. The hire proved to be a good one. Vollink has been with the company his entire post-Air Force career, working his way up to president. Last year, as part of a succession plan, his role changed to vice president and chairman of the board. He remains a pilot and serves as the company’s chief mechanical engineer.

Even while at Drury Southwest, Vollink has kept his connection to the military. He was in active duty as a pilot for eight-plus years before coming to work for Drury Southwest. Later, he would serve in the inactive reserve, but he missed the camaraderie and went into the reserves as an engineer, serving with the 231st Civil Engineering Flight with the Missouri Air National Guard in St. Louis.

In addition, Vollink has played an important role in numerous development projects across the country for Drury Southwest.

But there’s something special about working on projects close to home such as West Park Mall, Siemers Drive, Lorimont Place, Auburn Park Place and, most recently, the Drury Plaza Hotel Cape Girardeau Conference Center, a joint project with the city of Cape Girardeau.

He calls the Drury Plaza Cape Girardeau’s premier hotel. And he has good reason to do so: Drury Hotels — which has 50 percent ownership by Drury Southwest — won “Highest in Guest Satisfaction Among Upper Midscale Hotel Chains” in the J.D. Power 2019 North America Hotel Guest Satisfaction Index Study. It was the 14th consecutive year for Drury to receive the award.

“There’s not a question, we have the best management company in the hospitality industry in the country,” Vollink says, adding that Drury is No. 2 in the world just behind The Ritz-Carlton, which competes in the Luxury category.

He attributed these awards to the company’s desire for continuous improvement. Take customer service, for example. In this overall category, Vollink says, there are 50 different subcategories. You might be best in class for 35 subcategories, but there could be a few where there is room for improvement.

Vollink also puts his vast experience to use in other ways. He serves on the River Campus board of managers, as well as the board of directors for Saint Francis Healthcare System, among other organizations and committees. He is a member of St. Mary’s Cathedral and is co-chair of a fundraising campaign for the Catholic Campus Ministry on the Southeast Missouri State University campus.

Then there is his passion project — astrophotography, or the taking of photos using a system of computers, telescopes and cameras to capture galactic images. The astrophotography process takes one telescope for tracking and another to take photos. Computer processing software is needed to render the images. The photos Vollink captures are breathtaking.

Vollink built an observatory in his home and, in 2006, in order to share his love of space with young people, supported the construction of another observatory at Notre Dame Regional High School, giving students an opportunity to view God’s creation while enhancing their classroom learning.

“Sharing the astronomy with you is physics, but it’s also theological and philosophical, too, because it’s God’s creation that you look at and see taking place in front of you,” Vollink says.

Looking back over his career, Vollink is quick to point out his blessings.

“To see how many blessings we’ve had, it doesn’t mean we haven’t had challenges,” Vollink notes. “At work, there’s challenges all of the time. But you’ve got to take a look back and see how we’ve been blessed.”

Article is courtesy of the Southeast Missourian:  https://www.semissourian.com/story/2628303.html